Adenomyosis, also referred to as uterine endometriosis, is a benign disease confined to the uterine muscle. Endometrial cells from the lining of the endometrial cavity, migrate from that lining, most commonly into the posterior side or back wall of the uterus. As these cells respond to monthly hormonal changes, blood can get trapped in the myometrium producing a hard and enlarged uterus. This is a non-cancerous condition of the uterus that can mimic many of the signs and symptoms of fibroids

Adenomyosis is most frequently seen in women in their early to middle 40s and is often associated with hormone imbalance. 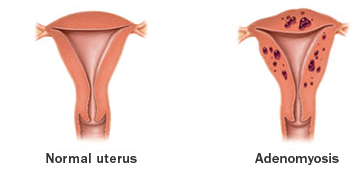 The first type appears as solid tumors and are called Adenomyomas. This form of the disease is localized and is an encapsulated collection of endometrial cells with well defined borders. They appear much like fibroids and are often mistaken as such. Many can be safely removed from the uterus, but depending on size and location can the culprit of hysterectomy.

The second, and more common type, is the diffuse disease that spreads out within the uterine myometrium. As the endometrial cells invade the organ, the uterus becomes enlarged and hardened, making pelvic exams and intercourse very painful. At the cellular level, the uterine muscle cells are being damaged as the disease spreads and eventually will lose their ability to stretch and contract. This is the main reason for the high rate of miscarriages during the 2nd and early 3rd trimester of pregnancy.

The severity of the signs and symptoms associated with Adenomyosis is often directly proportional to the degree of involvement and penetration into the uterine muscle. The more the disease spreads, the greater the symptoms. Many patients with Adenomyosis can be without symptoms (asymptomatic) just like fibroids and endometriosis, but most commonly women report the following symptoms associated with their enlarged uterus:

The cause of adenomyosis  is not specific but expert theories include:

Regardless of how adenomyosis develops, its growth depends on the circulating estrogen in a woman’s body. When estrogen production decreases at menopause, adenomyosis eventually goes away. 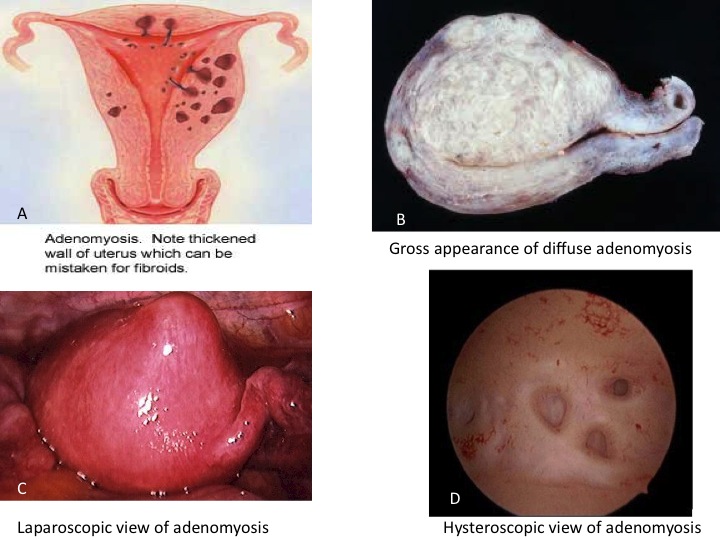 Relation between Adenomyosis and Fertility

Many women can conceive with Adenomyosis, but due to the damage within the organ many pregnancies are lost via miscarriage. As Adenomyosis spreads into the myometrium of the uterus, monthly bleeding actually damages the individual uterine cells. These muscle cells over time lose their ability to stretch and contract. When a conception occurs and the fetus begins to the grow, the uterus can only stretch so far before it can no longer hold the pregnancy: this is when spontaneous miscarriage and/or uterine rupture occurs. As the disease spreads monthly, the damage becomes more extensive.

If you are experiencing  any of the above symptoms then immediately make an appointment with Dr. Sarah Hussain who can palpate your uterus to determine if there are any large masses or enlargement of the uterus because of Adenomyosis and she will help you get your life back .