Majority of women suffer from conditions when the vagina gradually loses its function and integrity. These conditions include the months following giving birth, especially when breastfed child, when receive anti-estrogen treatment, after major vaginal surgery, and when you approach the menopause.

Psychological causes can include:

Physical causes can include:

Problems with Vaginal dysfunction are :

Specifically, sexual dysfunction in women may be due to:

Lower urinary tract symptoms affects a good number of adult women. Urgency of urine, having to pee many times a day, feeling sting or pain at peeing, and constant indistinct soreness at the pee hole are distressing complaints encountered. Together with the involuntary leakage of urine (or urinary incontinence), these women struggle to control the inconveniences on a regular basis, and to contain the embarrassment.

If you are experiencing any such vaginal dysfunction, bring up your concerns and discuss with Mrs. Sarah Husain for better and suitable solution & treatments!

Uterine polyps are soft red outgrowths attached to the inner wall of the uterus that extend into the uterine cavity. Overgrowth of cells in the lining of the uterus (endometrium) leads to the formation of uterine polyps, also known as endometrial polyps.

The reason for the cause of Uterine Polyps is swings in hormone levels . Estrogen, which plays a role in causing the endometrium to thicken each month, also appears to be linked to the growth of uterine polyps.

Uterine polyps are more likely to develop in women who are between 40 and 50 years old than in younger women. Uterine polyps can occur after menopause but rarely occur in women under 20 years old.

Factors that may increase your risk of developing Uterine polyps include:
• Obesity
• Use of tamoxifen, a drug therapy for breast cancer
• High blood pressure (hypertension)
• Cervical Polyps
• Being perimenopausal or postmenopausal
How Uterine Polyps and Infertility are connected?
When a woman is infertile and has no symptoms of uterine polyps, the chance that she has asymptomatic polyps is between 3% to 5. If she’s experiencing abnormal bleeding, it’s more likely that polyps are present.

Uterine polyps can act like a natural intrauterine device, preventing a fertilized egg from implanting in the uterine wall. They can also block the area where the fallopian tube connects to the uterine cavity, preventing sperm from traveling into the tube to meet the egg. Similarly, they can block the canal of the cervix, which would prevent sperm from entering the uterus at all. Uterine Polyps may also play a role in miscarriage for some women.

There is no way to prevent uterine polyps. It’s important to have regular gynaecological check-ups. If you are experiencing any such problems , immediately take an appointment with Mrs. Sarah Husain who is Specialist in Uterine polyps diagnosis..

PCOD is  known as the Stein-Leventhal Syndrome . This is a complex condition in which a woman’s ovaries are generally bigger than average. Polycystic means the ovaries have many cysts or follicles that rarely grow to maturity or produce eggs capable of being fertilised. It is a hormonal imbalance characterized by high levels of androgens (ie, male hormones such as testosterone) from the ovaries and is associated with insulin resistance

It is relatively common, especially in infertile women. It affects 12 to 18 per cent of women of reproductive age (between late adolescence and menopause). Almost 70 per cent of these cases remain undiagnosed.

The overproduction of androgens in women causes

Although there is no known cure for PCOS yet, following a few simple guidelines and bringing about a few changes in the lifestyle can help a lot in managing PCOS symptoms naturally. 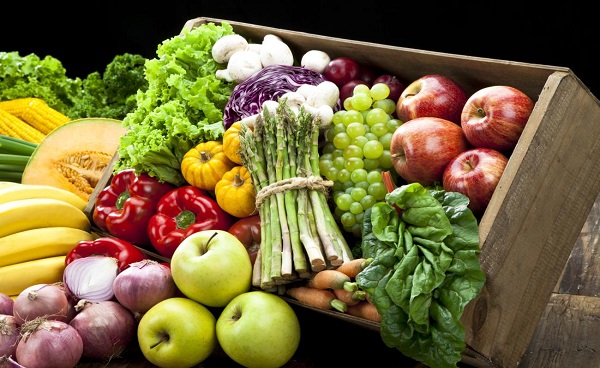 Are you Suffering from PCOS ? Then immediately Contact Specialist Sarah Hussain who can advise you about what treatment best suits you for healthy lifestyle.

Pregnancy is the time when woman’s body experiences great physical and emotional changes. A woman’s body undergoes many transformations during the nine months of pregnancy. Some of these physical changes are visible, such as an expanding belly and weight gain, while others are well known, such as an enlarged uterus, morning sickness and backaches.

Some of the Symptoms  during pregnancy :

The hormonal and physiologic changes during pregnancy are unique in the life of women.

Progesterone levels also are extraordinarily high during pregnancy. The changes in progesterone cause a laxity or loosening of ligaments and joints throughout the body. In addition, high levels of progesterone cause internal structures to increase in size, such as the ureters (which connect the kidneys with the maternal bladder). Progesterone also is important for transforming the uterus from the size of a small pear in its non-pregnant state to a uterus that can accommodate a full-term baby.

Weight gain in pregnant women increases the workload on the body from any physical activity. This additional weight and gravity slow down the circulation of blood and body fluids, particularly in the lower limbs. 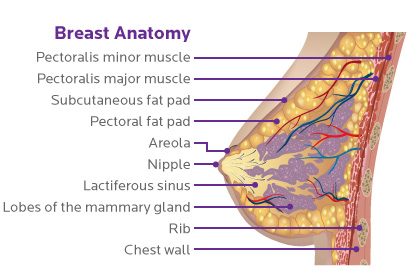 Pregnant women’s breasts often undergo a series of significant changes during pregnancy as their bodies prepare to supply milk to the newborn baby. Breasts may feel more full and tender during  pregnant, and her nipples may also be more sensitive to the touch 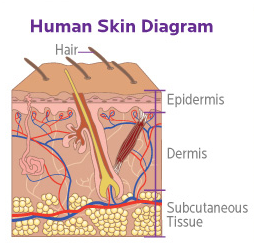 Skin Changes are very common during pregnancy, Mask of pregnancy (melasma) is a blotchy, brownish pigment that may appear on the skin of the forehead and cheeks. The skin surrounding the nipples (areolae) may also darken. A dark line commonly appears down the middle of the abdomen. These changes may occur because the placenta produces a hormone that stimulates melanocytes, the cells that make a dark brown skin pigment (melanin).

The high level of progesterone , a hormone produced continuously during pregnancy, signals the brain to lower the level of carbon dioxide in the blood. As a result, a pregnant woman breathes slightly faster and more deeply to exhale more carbon dioxide and keep the carbon dioxide level low. 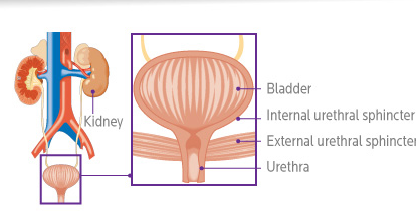 Like the heart, the kidneys work harder throughout pregnancy. They filter the increasing volume of blood. The volume of blood filtered by the kidneys reaches a maximum between 16 and 24 weeks and remains at the maximum until just before the baby is due.

The joints and ligaments (fibrous cords and cartilage that connect bones) in the woman’s pelvis loosen and become more flexible. This change helps make room for the enlarging uterus and prepare the woman for delivery of the baby.

Backache in varying degrees is common because the spine curves more to balance the weight of the enlarging uterus. 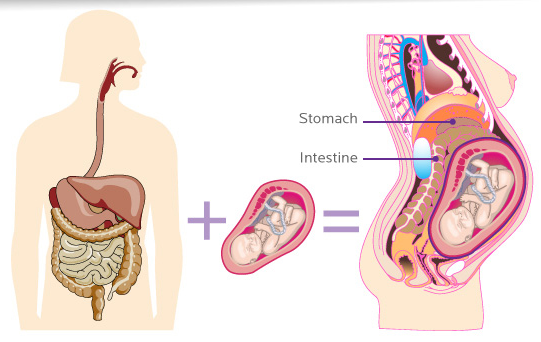 Nausea and vomiting, particularly in the mornings (morning sickness), are common. They may be caused by the high levels of estrogen and human chorionic gonadotropin, two hormones that help maintain the pregnancy. Nausea and vomiting may be relieved by changing the diet or patterns of eating.

The cervix, or the entry to the uterus, undergoes physical changes during pregnancy and labor. In many women, the tissue of the cervix thickens and becomes firm and glandular, and the cervix produces a thick mucus plug to seal off the uterus. The plug is often expelled in late pregnancy or during delivery

Most women experience changes in their sense of taste during pregnancy, preferring saltier foods and sweeter foods than non-pregnant women and having a higher threshold for strong sour, salty, and sweet tastes. Dysgeusia, a decrease in the ability to taste, is most commonly experienced

Another form of dizziness can result from lying flat on the back. This dizziness is more common after 24 weeks, but can happen earlier during multi-fetal pregnancies or conditions that increase amniotic fluid.

Choosing  a doctor during pregnancy  is one of the most critical factors . Dr. Sarah Hussain is there to guide and provide consultation to you throughout the pregnancy period to have a healthy and worry-less nine months. Schedule an appointment with her for perfect pregnancy related advice.

Overactive bladder, sometimes known as urge incontinence, is a problem that results in a sudden urge to urinate and potentially incontinence as well. There are a number of factors that are known to affect this condition. It is possible for certain foods to worsen this condition, potentially irritating the bladder or the urinary tract and exacerbating symptoms. The effects of various foods on overactive bladder vary from person to person.

Certain foods and drinks can trigger this reaction more easily than others, for a variety of reasons. See below for the foodstuffs that are best to sidestep.

If you have any Bladder related problems then immediately take an appointment with Dr. Sarah Hussain who is specialist in providing best solutions for Uro-Gynaecology problems.